When Do You Need Scaffolding?

Five Most Essential Pieces of Safety Equipment for Construction Workers

Different Types of Scaffolding and Their Uses

There is a clear definition and understanding regarding what scaffolding is:

Scaffolding is a temporary structure used by workmen when renovating, maintaining, repairing or cleaning a building that aims to keep them safe, give them easy access and allow for improved efficiency. More detail on the purpose of scaffolding can be found here

But if you are in the market for some scaffolding then you will also need to understand the different types of scaffolding available and which is right for you.

We are breaking down the eight main types of scaffolding and their uses:

Access scaffolding does what it says on the tin. Its purpose is to help construction works gain access to hard to reach areas of a building such as the roof. It’s typically used for general maintenance and repair work.
Access scaffolding is a service that we ourselves provide and you can find out more about here

Suspended scaffolding is a working platform that is suspended from a roof with wire rope or chains and can be lifted and lowered when needed. This is ideal for painting, repair works and window cleaning – all jobs that may take a day or less to complete and only require a platform and easy access.

Trestle scaffolding is typically used inside buildings for repairs and maintenance works at a height of up to 5m. It is a working platform supported by movable ladders and is most commonly used by bricklayers and plasterers.

Cantilever scaffolding is used when there are obstacles preventing a scaffolding tower being erected such as the ground doesn’t have the capacity to support standards, the ground near the wall needs to be free from traffic or the upper part of the wall is under construction.

Conventional scaffolding requires a frame, post or base post to rest on the ground or lower structure; whereas, cantilever places the standard some height above ground level with support from needles.

A putlog scaffold, also known as single scaffold, consists of a single row of standards, parallel to the face of the building and set as far away from it as necessary to accommodate a platform. The standards are connected by a ledger fixed with right angle couplers and the putlogs are fixed to the ledgers using putlog couplers. (definition as taken from scaffmag.com)

This is hugely popular and convenient for bricklayers which is why it is often referred to as bricklayer’s scaffolding.

On the other hand, there is double scaffolding which is more commonly used for stone masonry because it is hard to make holes in stone walls to support putlogs. Instead, two rows of scaffolding is required – the first is fixed close to the wall and the second is fixed some distance from the first. Then, putlogs are supported at both ends on ledgers making them completely independent of the wall surface.

Pretty self-explanatory, but steel scaffolding is constructed of steel tubes fixed together by steel fittings making it strong and more durable and fire resistant (though not as economical) as conventional scaffolding.
This is far becoming the more popular option on construction sites simply for the increased safety that it provides for workers.

Patented scaffolding is also constructed from steel but used special couplings and frames so that it can be adjusted to the required height. These are easy to assemble and take down and more convenient for short-term works such as repairs. 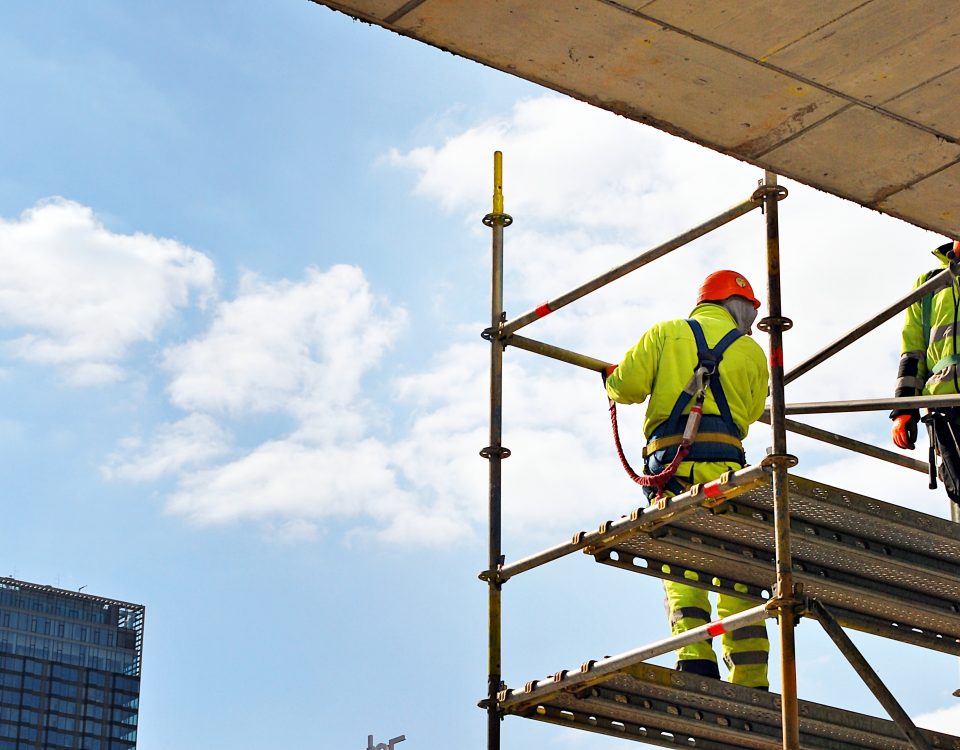 How To Prevent Falls and Injury When Working On Scaffolding